Everybody also seems to be talking about Coron and El Nido when it comes to the islands of Palawan. Granted, these might be some of the most beautiful destinations in all of the Philippines, or the world for that matter. Still, in the capital of Palawan, Puerto Princesa, there's a major natural landmark not far from the city, which you might wanna put on your 'Palawan to do list' as well. It's called the Puerto Princesa Underground River and has been included in the 7 New Wonders of Nature since 2012…

The cave itself is actually 24 km (15 mi) long while the river winding through it is 8.2 km long. Only 4.3 km of the river is easily accessible by tourists because the deeper you go into the cave, the less oxygen there is available. For the other 3.9 km you need to get a special permit cause in the deepest areas of the cave it's nearly impossible to explore (without any external oxygen).

The deeper areas are hard to explore due to oxygen deprivation.

The cave is above sea level, while the lower part of the river (up to 6 km from sea) is subject to the tidal influences. Geologists and environmentalist believe there are also waterfalls in the cave, because they discovered a second floor to the river in 2010. They also unveiled many large chambers inside the cave, including the incredible 350 meter long Italian's Chamber with it's 2.5 millions square meters in volume. This is believed to be one of the largest cave rooms in the world.

During the tour you will get led through some impressively and large chambers.

The Puerto Princesa Underground River has made its introduction into the New 7 Wonders of Nature list on January 28, 2012. Since then its among some true other beauties on the list, namely: Amazon rainforest, Halong Bay, Iguazu Falls, Jeju Island, Komodo Island, and Table Mountain. It's a true wonder of nature indeed, and people long believed it was the longest underground river in the world, until the Mexican Yucatán Peninsula underground river disproved that.

The Underground River park itself is also worth mentioning as it has a well-protected biodiversity hosting more than 800 plant species (including 295 trees), 165 bird species, 30 mammals, 19 reptiles, and 8 bat species (mostly residing inside the cave). Because of its biodiversity the park and surrounding area has some of the most important forests in Asia and was inscribed by UNESCO as a world heritage site on December 4, 1999. 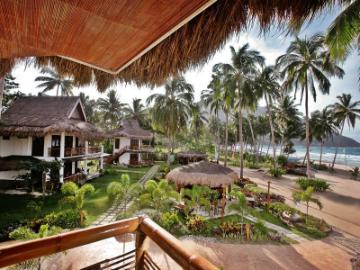 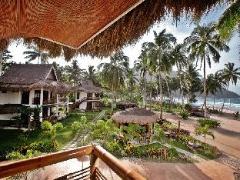 The bats tend to poop

To enjoy the Underground River you would have to go to the capital's city's City Coliseum building. The Puerto Princesa Underground River National Park has been managed by the city government since 1992. It's easy to get a permit at the Coliseum though and after you do that you would need to arrange a ride for yourself going from Puerto Princesa to a town called Sabang (a ride by car takes about 1.5 hours). You'll know when you've arrived because it's a medium-large touristic area with many souvenir stalls, and a large welcome center where you also need to register first.

A vast array of ferry boats are awaiting you as you step onto the welcome center area.

From Sabang it's a short ferry ride to the park where you arrive at quite a nice beach and piece of nature already. By then you've seen some large and beautiful rock formations already coming by. You will be urged to continue into the park though where if you get lucky, monkeys can be seen. The monkeys are very used to tourists and especially the food they bring with them: watch out cause they might steal your food every single way they can cause that's like 'their thing'. Other than that these monkey scenes might make for some swell camera shots so just take the best of it.

Some nice rock formations can be seen already as you step onto the beach after your short ferry ride.

A short but picturesque pathway later and you've arrived at the entrance of the Puerto Princesa Underground River already. Many people would complain afterwards that this attraction is too touristic and over-exploited already since you would really be urged to step into the boat without any delay. At the most busiest time you might feel like the operators would treat you like kettle but just try to go on more off-peak times and again: take the best of it.

Take the best of it and leave all worries and problems behind you for a while, as you enter the marvelous Underground River.

Even if you'd be a little annoyed by some over tourism before, once you enter the cave this will soon go away as you'll be mesmerized the first minute in. The first thing you'll notice is the many bats inside the cave and the squeaking sounds their making; this will not go away. In fact, they give you helmets to wear inside the boat and this is not just for safety. The bats actually tend to poop on the tourists' head; perhaps they don't take kindly to people entering their domain.

The helmets they'll give you are for safety as much as they are to protect you against the bats pooping on your head.
Recommended budget accommodation near the PP Underground River (click to visit in new tab): Get ready for a ride you won't forget

Once you feel comfortable and protected within your boat and the bat sounds have become a normal part of you and your surrounding, you'll begin to watch all the gorgeous stalactites and stalagmites at every side of the cave, sticking out with charm. The boatmen will shine spotlights on the most interesting and beautiful parts of the cave and you will have the possibility to listen to an audio tour as well. You'll be riding through the cave's many large chambers with some of the biggest stalagmites you've ever seen. Also many formations look like objects or images including a horse, cacao fruit, mushrooms, the Holy family, and even a naked lady. The boatmen will point all of this out for you so you can just sit back and relax, while riding a boat ride you'll never forget in a lifetime.

Many of the formations evolve themselves into some kind of mushroom shape.

The pictures don't tell much, this video will show more. Don't watch the video below if you don't want spoilers and you just wanna experience the tour for yourself.